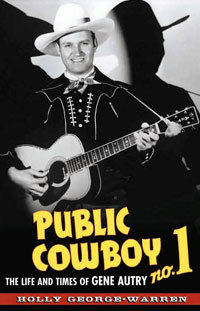 To order, click on the image above.
Read more reviews at GeneAutry.com
Listen to radio interviews with Holly George-Warren

Public Cowboy No. 1: The Life And Times Of Gene Autry

WINNER - ARSC Award for Excellence, Certificate of Merit for the Best Research in Recorded Country Music, 2008.

"In this enjoyable, thoroughly researched volume, author and pop culture commentator George Warren (Cowboy) details the life and work of Gene Autry, the influential star of music, movies, and television. After a descriptive genealogy, George-Warren takes the reader through Autry's formative years, featuring his deadbeat dad, the oft-married Delbert, and his long-suffering mom, Nora. Born Orvon Grover Autry in 1907, the cowboy's childhood was spent watching Tom Mix movies in Achille, Okla., and singing for classmates. The bulk of the book is devoted to Autry's career as a musician and film actor, beginning with the telegraphing job he neglected in order to make his early recordings, and his subsequent discovery by American Record Corporation A&R man Art Satherly. Most striking, though perhaps not surprising, is that the much-revered man who "reinvent[ed] the saga of the cowboy and the West" was not a cowboy at all, but a deft performer and professional who made an unexpected, highly fortuitous move from film to television in the late 1940s. Included are abundant notes, a bibliography and a brilliant chronological list of Autry's 640 recording sessions. An easy, fluid read, this illuminating biography also provides a look into the early days of the radio and recording industry."
From Publishers Weekly, December 31, 2007

“Johnny Cash called him a major influence, Ringo Starr wanted to be a cowboy like him, and Willie Nelson named a son for him. Public Cowboy No. 1 tells the story of the man who inspired their admiration with a quality worthy of the subject... [George-Warren] doesn’t psychoanalyze Autry, interpret him or tell alleged ‘secrets’ that she alone miraculously knows. Her Autry is externalized, but her research is deep and impeccable... Every celebrity could use a biographer like Ms. George-Warren.” - Jeanine Basinger, The New York Times, April 6, 2007

“The definitive portrait of the former Orvon Grover Autry, a poor Tioga, Texas, boy who learned to pick on a Sears Roebuck guitar.” – John Beifuss, The Memphis Commercial Appeal, June 3, 2007

“Public Cowboy No. 1 provides fascinating details about the world of the B movie.” – Glenn C.Altschuler, The Philadelphia Inquirer, May 20, 2007

“Holly George-Warren gives us Public Cowboy No. 1, [Autry’s] first serious, full-length biography. There isn’t likely to be another for a long time, so it’s fortunate that Ms. George-Warren’s is a good one. It’s solid and detailed, and it provides plenty of warts-and-all gossip.” – Bryan Woolley, The Dallas Morning News, May 27, 2007

“Meticulously researched… The author provides a detailed history of the Hollywood “B” westerns Autry made, and she takes great pains to catalog Autry’s records within the narrative, as well as providing a special index of his recording sessions. George-Warren also has many tales to tell, and she does so beautifully.” – Rick Tamble,The Tennessean, April 8, 2007

“Using documents, interviews with hundreds of people who knew Autry, and his own autobiography, [George-Warren] provides a close look at what made Autry the hero he was.” – Fred K. Eichelman The Roanoke Times, September 23, 2007