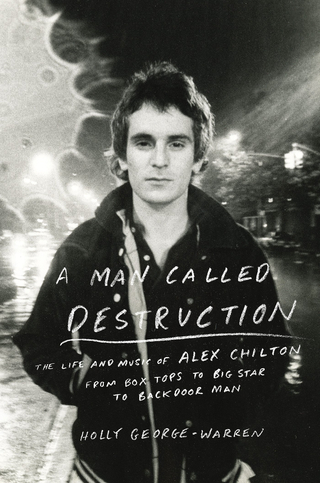 A Man Called Destruction: The Life and Music of Alex Chilton, From Box Tops to Big Star to Backdoor man

A thoroughly reported biography illuminating the life and work of one of the more mystifying and influential cult figures in rock.
Few musicians have ever experienced a career trajectory and musical progression quite like Alex Chilton’s (1950–2010). At the age of 16, he enjoyed (if that’s the word) not only his biggest hit, but “the biggest hit single ever recorded in Memphis” with “The Letter” as the lead singer of the Box Tops. Though he was little more than a hired voice, he subsequently established his creative bona fides in Big Star, a band so influential that it all but invented indie rock. That band suffered from a series of recording-label disasters that prevented it from reaching its popular potential at the time, but Chilton subsequently proceeded to confuse his fervent fan base (which increased, along with his influence, as bigger bands such as R.E.M. paid homage) with solo recordings that ranged from abrasively noisy and raw to lounge lizard-y (including “Volare”). It may be hard to find the common denominator, but veteran rock journalist George-Warren (Public Cowboy No. 1: The Life and Times of Gene Autry, 2007, etc.) connects the dots, showing how it all fit together: his Southern upbringing in a family that was patrician, artistic and permissive, his early mood swings, his later suspicion of the music business and rejection of the adulation that belatedly came his way. He became a true bohemian, bedeviled by alcohol, drugs and a penchant for tempestuous romance. He even took an extended hiatus from music to work as a New Orleans dishwasher (and later live in a tent). But he came to terms with his life and legacy before his death at 59, and “he died a happy man,” perhaps the most surprising twist for such a complicated musician and man.
As an artist who “left behind…many lifetimes of brilliant music, a legacy that will inspire generations to come,” Chilton receives the biography he deserves. starred review, KIRKUS, January 20, 2014