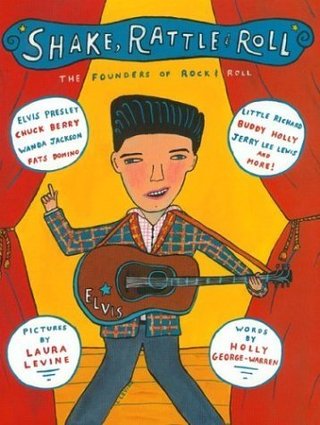 Shake, Rattle and Roll: The Founders of Rock & Roll

"Kids who are just discovering their musical tastes will be amazed by a very cool picture book called 'Shake, Rattle, & Roll...Yes, there was there was life before current pop stars--namely, 14 pioneers like Chuck Berry, Little Richard, LaVern Baker, Ritchie Valens, and of course Elvis. The zippy, informative text is by Holly George-Warren, a writer for 'Rolling Stone' who doesn't talk down to young reders in her tribute to 'ancient rhythms originating in Africa.'"

"The creators of this funky, fun picture book know their subjects. As a writer and artist contributing to 'Rolling Stone' and other music publications, they have spent years honing their ears, eyes, and brains to rock's founders. Focusing on 14 of the original pioneers of rock & roll, including Little Richard, Buddy Holly and Elvis Presley, the book's odes to the great ones are informative, brief and hip. How amazing is it, after all, that in the 1950s, a slew of rhythm and blues, gospel, country, and fiddle-inspired banjo tunes inspired several musicians to cook up rock and roll."
--Lee Littlewood, Copley News Service

"George-Warren's book is packed with familiar and arcane facts, like the origins of Bo Diddley's name in a Southern folk instrument called the diddley bow, or the beginnings of Little Richard's famous lick, 'A wop bop a loo bop a wop bam boom!' And there are eye-opening sections about singers like LaVern Baker--who began her career as little Miss Sharecropper, and hit it big with 'Tweedlee Dee,' 'Tra la la,' and 'Jim Dandy' or Wanda Jackson, the Queen of Rockabilly who is still playing today, over forty years after Elvis connverted her to blend her Oklahoma country sound with rock."
--Fiona Barnes, Recess, December 2002