The Road to Woodstock 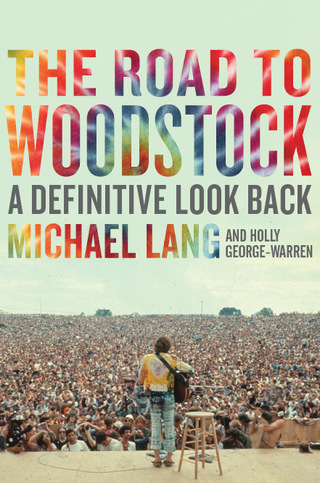 The behind-the-scenes story of the 1969 Woodstock Festival, co-written with festival producer Michael Lang.

August 15, 1969. Richie Havens, the first act of the Woodstock Music and Art Fair, takes the stage and welcomes a crowd of several hundred thousand to the green fields of Max Yasgur’s farm—which is quickly becoming the second largest city in New York State. People are dancing, imbibing, meeting, and helping the ever-increasing stream of new neighbors set up camp.

Beyond the fields, the roads are jammed with cars and people, some of whom have been traveling for days to reach the festival site. Havens enthusiastically delivers folk-blues standards and Beatles songs, then begins to improvise, riffing on the refrain “Freedom.” Freedom is at the heart of the harmony of this landmark cultural event—along with brotherhood, love, and peace. The next three days are the realization of months and years of dreaming and planning, the result of miracles and crises and coincidences.

The story of the festival begins with Michael Lang, a kid out of Bensonhurst, Brooklyn, who liked to smoke a joint and listen to jazz and who eventually found his way to Florida, where he opened a head shop and produced his first festival—Miami Pop, featuring Jimi Hendrix, Frank Zappa, and others. In the late sixties, after settling in Woodstock, he began to envision a music and arts festival where folks could come and stay for a few days amid therural beauty of upstate New York. The idea crystallized when Lang talked it over with Artie Kornfeld, a songwriter and A & R man, and with two other young men they formed Woodstock Ventures. They booked talent from Janis Joplin and the Who to the virtually unknown Santana and Crosby, Stills and Nash; won over agents and promoters; broughtin the Hog Farm commune to set up campgrounds; hired apeacekeeping force; took on fleets of volunteers; appeased the Yippies; and were run out of one town and found anothersite weeks before the festival.

On the ground with the talent, the townspeople, and his handpicked crew, Lang had a unique and panoramic perspective of the festival. Enhanced by interviews with others who were central to the making of the festival, The Road to Woodstock tells the story from inspiration to celebration, capturing all the magic, mayhem, and mud in between.

“Reading this inimitable account of how Woodstock really came to pass makes the Manhattan Project seem like whippin’ up one of my Mom’s custard pies. Not only does Michael Lang set the record straight, he and Holly George-Warren will knock you out and once again make you wish that you were there.”
—Terry Stewart
President of the Rock and Roll Hall of Fame and Museum

“Lang presents the Woodstock story in an easygoing fashion, while George-Warren collects the interviews (both new and archival) that appear throughout the book. We hear from Carlos Santana, Richie Havens and Abbie Hoffman, among others. Set designer and last-minute MC Chip Monck and head of security Wesley Pomeroy are excellent additions, helping to boil the business of the festival down to its human core.” — Los Angeles Times

“Lang offers a vivid and lively account of those hectic and historic three days that encapsulated --and have become shorthand for--the counterculture of the era. The shelf of books about Woodstock is groaning, but Lang’s is the best fly-on-the-wall account, tantamount to having had a backstage pass to an iconic event.” — New York Post

“Lang’s book is invaluable…[he] wraps up his cinematic reminiscing by taking a seminal thread from Woodstock’s history—Jimi Hendrix’s breathtaking interpretation of “The Star Spangled Banner”—and linking its poignancy to what some have called the 21st century Woodstock moment: the day Barack Obama became the first black president.” — USA Today


“Totally rocking firsthand account of Woodstock…In addition to providing an engaging record of the sights and sounds of the festival, Lang offers an in-depth look at the business behind the creation and execution of the event that all but defined the late 1960s….The author is a generous raconteur with a good memory for specifics, but what elevates this book above the level of most rock memoirs is the inclusion of voices other than Lang’s—including scenesters and key Woodstock players like Jimi Hendrix, Roger Daltrey, Pete Townshend, Jerry Garcia, Abbie Hoffman, John Sebastian, Greil Marcus and Wavy Gravy….Well-written, informative and tons of fun, Lang’s book will be appreciated by rockers and musicologists of all ages.” — Kirkus Reviews