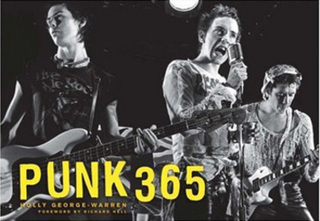 "Having previously taken on country singers in the kids book "Honky-Tonk Heroes and Hillbilly Angels," and Gene Autry in a grown-up bio, George-Warren points her well-tuned eye at punk. Her informative, concise blurbs accompany 365 black-and-white [and full-color] pictures of punk-rockers, starting with punk progenitors like the Velvet Underground and 13th Floor Elevators and moving on to the hey-day with the Ramones, Patti Smith, the Sex Pistols and more, in the clubs and out on the streets. Our fave pix: Patti Smith and a smiling Bob Dylan backstage at the Other End in 1975."
By Billy Heller and Abby Wisse Schachter, New York Post, December 16, 2007

"Look ma, a coffee table book on punk rock...sort of. Though not oversize, Punk 365 (Abrams) is certainly thick and full of pictures from the original punk rock-new wave era of the late '70s... The original punk explosion was an artistic/critical success but failed in the mass marketplace... and the visuals from that time now gone are captured in this remarkable book, with shots by photographers that include Bob Gruen, Ebet Roberts, Roberta Bayley, Jill Furmanovsky, and others... In addition to iconic groups such as the Pistols and the Clash, there are punk godfathers such as Velvet Underground and Flamin' Groovies, as well as post-punk outfits like Jesus and Mary Chain, who certainly do fit into the legacy. This is a fine cross-generational book for punk, power-pop, and new wavey enthusiasts of all kinds." By Darryl Morden, Buzzine, Nov. 16, 2007.

Featuring text by renowned music writer Holly George-Warren, a foreword by the forefather of punk, Richard Hell, and both iconic and rarely seen images by photographers including Bob Gruen, Roberta Bayley, and Jill Furmanovsky, PUNK 365 (Abrams; November, $29.95) captures the energy, innovation, fashion, and social upheaval that was and is punk. Featuring vintage Sex Pistols (who announced a 30th anniversary reunion show yesterday) on its cover, PUNK 365 serves as the first and essential illustrated book to follow the path of punk from the pre-cursor pioneers such as the Velvet Underground and the Stooges, through the progenitors of punk, the early and iconic punk bands that emerged from various scenes, and onwards to the proliferation of punk in the 1980s and beyond.

Thirty-plus years ago a dark rumble of noise gurgled up from the Lower East Side of New York City, made its way across the Atlantic to Great Britain, zigzagged back over the pond to the West Coast, and exploded. Its name—punk. In PUNK 365, the most provocative photography documenting the performances, the looks, and the attitude has been gathered together, revealing reverberations that continue to shake up the status quo.

An expert text is paired with photographs curated by Warren that capture some of punk’s most famous (and infamous) personalities and places including: doyenne of CBGB Debbie Harry; pre-punk pioneers, the Stooges, the New York Dolls, the MC5; New York’s harbingers of change, Patti Smith, Richard Hell & the Voidoids; London’s anarchists, the Clash, the Slits. The West Coast’s anti-Beach Boys, X, the Germs … and many more breakers of musical barriers and reinventors of contemporary culture. With more than 300 different artists and photographers, PUNK 365 includes garage punk to hardcore and everything in between.