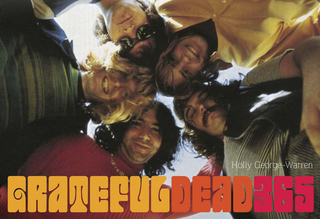 With over 740 pages of intimate photography and enlightening description, Grateful Dead 365 is a dazzling and indispensable prize for Deadheads, collectors, and rock enthusiasts everywhere. This extraordinary tome follows what is arguably America’s most identifiable band from their inception as the Warlocks in 1965, through 43 epic years of inexhaustible touring, all the way to their 2008 benefit reunion concert for Presidential candidate Barack Obama.

Featuring the history-capturing work of such members of the Dead’s tireless photographic entourage as Baron Wolman, Jim Marshall, Herb Greene, Peter Simon, Jay Blakesberg, and Susana Millman, along with the era-defining artwork of Stanley Mouse, Grateful Dead 365 captures the most intimate and exciting moments in the life of the only band to have ever generated its own sub-culture.

Each of the 365 images is accompanied by a lively and elucidating caption, meticulously researched and written by Holly George-Warren, one of pop-cultures most highly respected historians.

Looking back at an incomparable career of never-ending highs, devastating lows, and uninterrupted musical euphoria, the Dead themselves were the first to exclaim, “What a long, strange trip it’s been!” Grateful Dead 365 puts you in the passenger’s seat for every leg of the journey.

"This is the Grateful Dead's kaleidoscopic 'long strange trip' in 365 by prolific author Holly George-Warren, co-editor of the Rolling Stone Encyclopedia of Rock & Roll and curator for the Rock and Roll Hall of Fame Foundation and the Grammy Museum. Dedicated to Deadheads past and present, George-Warren's 'flashback' traverses five decades with both iconic and new images from the pre-Dead Warlocks to the Dead reunion for a benefit for Barack Obama in February 2008, accompanied by illuminating historical context.

"A 1995 photograph taken by Jay Blakesberg in San Francisco of a shrine to Jerry Garcia that includes Garcia portraits also shot by Blakesberg is accompanied by hippie peace activist Wavy Gravy's explanation: 'The beauty of the Grateful Dead was their relationship with their fans. They just take this great big ball of love and bounce it out to the fans and the fans bounce it back, and each time it just gets bigger.'"
- Mary Ishimoto Morris, The Washington Post, November 23, 2008