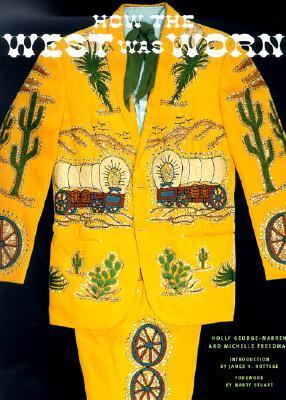 How the West Was Worn

"'How the West Was Worn'"...is a history of silver spurs, embroidered boots, 10-gallon hats, coonskin caps, chaps and leather fringe--explained in detail and illustrated with brilliant color photos. The 240-page coffeetable book describes how movie stars such as Gene Autry, Roy Rogers, and Dale Evans spurred the fashion's surge in popularity in music (Buck Owens, Gram Parsons and Madonna) and fashion (Ralph Lauren). It's for anyone who dreams of being a rhinestone cowboy."

"'Western wear is America's folk costume. It represents our heritage the way lederhosen does to Germans,' said fashion designer Michelle Freedman, coauthor with Holly George-Warren of the lively 239-page book, 'How the West Was Worn'. Together with George-Warren, she conducted nearly 200 interviews for the richly illustrated book. In the first chapter, the authors suggest rightly that the western look is a melting pot of Native American, Mexican, Spanish, and European traditions. They introduce the idea that western attire was a liberating force for frontier women...Western clothing also became the first American tourist garb, purchased and worn by Eastern dudes such as Teddy Roosevelt to prove to folks back home that they had suvived the wild frontier of Meriwether Lewis and William Clark. ... The singing cowboys were hands-on about their clothing, according to the authors, who interviewed surviving relatives. Autry requested details such as eyelets and lacing, and later, devised, the idea for shirts with glow-in-the-dark trim. Rogers methodically creased his Stetsons by dousing the hats with water, tying a scarf around them, and letting them dry in the sun. "It's this great paradox,' George-Warren said. 'As cowboys [Autry and Rogers] had this reputation for being macho he-men, but then they had this other side.'"
--Booth Moore, Los Angeles Times, 10/19/01